It is believed that living in a foreign country can be unique and challenging at times. Especially if you are by yourself, far from your parents and beloved ones. However, this challenge can turn out to be a great, enjoyable, and fruitful experience if one knows how to coexist, be patient, and ready to learn along the way. I had a great chance to experience this challenge, a unique journey in the USA I will make sure I tell my kids one day.

When I lived in Morocco, at the age of fifteen, to be exact, my teacher of English taught us how to introduce ourselves in English. It sounded and even felt so weird at first. However, it resembled love at first sight. Yes, I fell in love with this language, and that was my motive to dedicate a ton of time and effort to learn it and become a great speaker one day. My teacher would remind us that speaking good English is like our passport to the whole world. So, I planned to choose English studies as a major after I graduated from high school. But as the English actor, Orlando Bloom once put it cogently, “Life sometimes doesn’t work out exactly as we plan or hope for.”

Right after I got my high school degree with honor, my parents were so proud of me. Nevertheless, my jealous cousin who graduated from the department of English, told my dad that the latter is just a waste of time. Because we cherish our parents in Morocco, there was no way I could say no to my dad though it felt like you separated two people loving each other. I did what he said, and his decisions were unbeatable. He told me to apply for a business school saying it was the future. I did what he asked me to do because my dad had to fight tooth and nail for my well-being.

The first year of business school was not fun at all. This might sound peculiar, but in Morocco, you can get more than one high school degree. You can get your second one as an external candidate; you apply for it and wait until the day of the final exam and take it. If you pass, it means you have a high school degree in your pocket. I had my second high school degree in my first year of business school. With that, I applied for English studies and was finally able to hit two birds with one stone, making my dad happy, and getting back to my love, the English language.

I worked hard and proudly got both my diploma in international trade and my Bachelor’s in English linguistics. In Morocco, it’s equivalent to an MBA. I worked as a teacher of English for three years then as a senior sales consultant at a dealership; I was given a company car, great job benefits, and used to make good money. All of that vanished when I found out that the department of the USA in Morocco emailed me congratulating me on my acceptance for my lottery to go to America, a visa I applied for just for fun. I was reluctant at first, not sure if I wanted to leave Morocco for good. But since it was always my dream to go to America, I made up my mind and accepted my Diversity Immigrant Visa.

In March of 2017, I had to start a journey that flipped my life upside down. I still vividly remember every single last moment in Morocco. Right after I booked my flight, paid by one of my best friends as a gift, I gave a letter of resignation to my boss whose face frowned the minute he saw it. He was not happy. He tried to convince me to stay, but I told him that I have already decided. After his persuasive speech didn’t work, he gave 5000.00 Dhs (≈ $500.00). “I know the process is expensive, here is a little gift. I wish you the best of luck there in America. In case you change your mind, the door is always open to hiring you back”. He added. I was over the moon because I knew I left my job on great terms.

Two days before the flight, I had to give my little family a goodbye hug and kiss. I hate goodbyes, but they are inevitable. I don’t cry so easily. So, I promised not to cry – a promise that was broken in a couple of minutes. It seemed easy, but it was hard to leave my family whom I lived with for 24 years since the day I opened my eyes. I left my city and drove five hours to the north where Casablanca international airport was. My brother Youssef, a professional graphic designer, had to take the morning off from work so he could drive me to the airport the next day.

As it was my first flight ever, it was also the longest one so far. I had to fly from Morocco to Doha, Qatar, then to Hartsfield–Jackson Atlanta International Airport in Georgia, the busiest airport in the world. I still clearly recall the first phrase I heard in the USA, “welcome to America, sir!” said a police officer with an encouraging smile on his face the second he checked my passport. Frankly speaking, I felt happy, welcomed, and accepted. However, I was a little bit nervous to encounter any type of culture shock though I took a whole semester of the American culture in college back in Morocco.

According to Merriam-Webster online dictionary, culture shock is a sense of confusion and uncertainty sometimes with feelings of anxiety that may affect people exposed to a new culture or environment without adequate preparation. I stayed with Dr. Randi D. Ward, a gifted teacher, professional author, and like a mom to me. Her husband Bill was so nice to me; he treated me like his son and so did she. They gave me their son’s room as he did not live with them anymore. I thought I was going to encounter some forms of culture shock, but so far, I was wrong. Given the fact I am Muslim, I prayed all my prayers as if I were home. They would even take me for Friday prayers to the closest mosque and waited for a good 90 minutes. I was so blessed to have them in my life and still am. They made my cultural transition fun, smooth, and easy to digest.

After three weeks of living with this lovely family, I decided to move out to New York. It was always my dream to visit and even live in this hustling bustling state. Visiting Manhattan for the first time was a form of culture shock I sensed. The skyscrapers were so shocking along with a crowd I never witnessed in my entire life. Yet, I loved how different people from different backgrounds are based in one city. For food lovers, New York is a great spot for all cuisines of the world. Thank God I speak good English. Those years of hard work did not go in vain. However, I had some difficulties understanding the New York accent. Little did I know that most New Yorkers say ‘aks’ instead of ‘ask’. Later, I learned that this phenomenon is called metathesis which is putting letters in different orders.

As the days rolled by, getting used to my new American lifestyle, people asked me so many questions about me and my background. One of the questions I can’t get away with is: “Why did you come to America?” Many Americans ask me the same question. I usually just say “for a better future”. Let us be honest, no one has the right to ask this personal question. If an American, for example, came to Morocco, I would not ask him/her this type of question. But I know most of the people who asked me did it out of curiosity. The real answer is unlike Morocco, in America, you get credits for whatever you do. Also, if you are a hard worker, everything is possible here in America. For that, they call it the land of dreams. I feel blessed that I live here.

From a challenge standpoint, I have learned a great deal that America is the best place to live. In America, there is freedom of speech. It is an essential quality of a healthy democracy. The latter is a basic human right. But still, it is not everywhere. There is also the freedom of belief. For the crucial role the media plays in glorifying or even tarnishing the image of anything, especially religion, I predicted that I would be more likely to witness some fingers, if not all, being pointed at me for the simple reason I was born Muslim. I was wrong! People didn’t ask me about my religion, instead, they kept asking the repeated question: “Why did you come to America?” 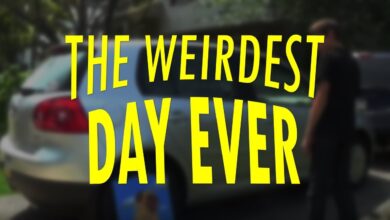 is a teacher of English and a senior sales consultant. He got his diploma in international commerce and a B.A in English linguistics from Ibn Zohr University, Agadir. His writings take the form of articles, poems, and memoirs. He is the president and founder of Morocco Pens.
By Ayoub Kadi
Recent Posts
Facebook Twitter WhatsApp Telegram
Back to top button
Close
Close
Close
Log In